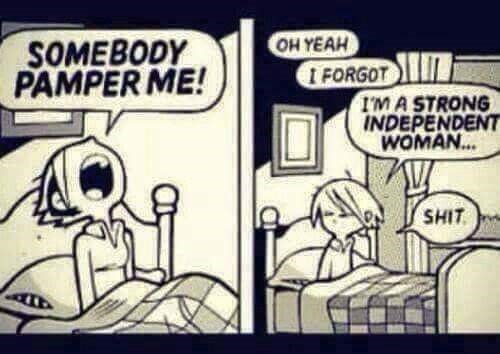 My husband sent me this, as a joke. I responded with a lengthy piece on how the concept of an independent woman or a woman with feminist values is often misconstrued. Sorry to the husband but also thanks for getting me to re-start my blog.

When I bring up a feministic/independent viewpoint, what I’m saying is not that “I am one of the boys” or that “Women are stronger” and I’m definitely not saying “I hate men”…unless you’ve given me a solid reason to dislike you…which would not change even if you were a woman.

Here’s what I am in fact saying:

Basically – “There are areas of expertise where men may be better than women and vice versa. That doesn’t make anyone of us any less equal. If anything, we complement each other. That being said, a No needs to be respected on both sides.”

If you feel anything otherwise, then that would be your assumption. Come talk, we can agree to disagree over a drink or coffee 🙂

P.S: These are my thoughts. Any resemblance or similarity to any other thoughts/actual events & situations is purely coincidental.